We could clearly see evidence of recent flooding, but it was still hard to grasp. I mean to see evidence far from any body of water was strange. Another thing that struck me was that you normally only saw fresh bones. Nothing old was left because it would be swept away when Zakouma floods. 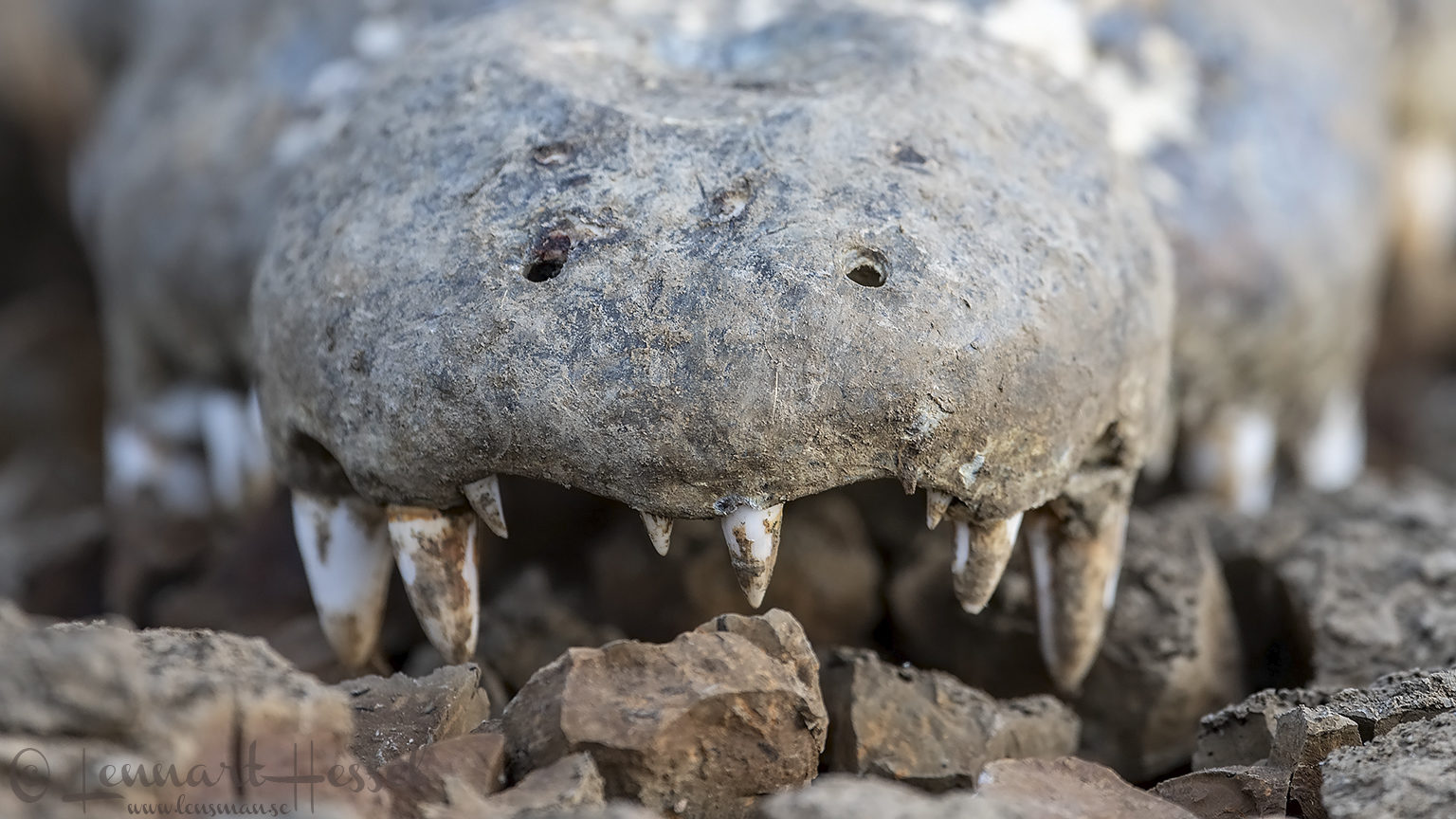 The first visit at Salamat River

We went to the Salamat River on our second evening. I knew a little what to expect and one thing I had hope of experience was a feeding frenzy with Pelicans, Storks and other birds. Our reason this evening was to see if we could find a Buffalo herd coming down to drink.

Once there I discovered that Park Rangers had a mobile camp not far from the spot that our guide knew where used by lots of different animals. That meant we had to switch mindset and instead tracked the Salamat River backwards.

The river act as a magnet for the wildlife and we felt confident. We should definitely bump into something of interest. What we came upon was a scene that is hard to describe in words.

We found plenty of water loving bird together with mammals in a stunning setting. We had Kordofan Giraffes at the back, Olive Baboons foraging on the bank and a few Central African Savannah Buffalos having a drink in the middle of the riverbed. A wonderful scene and one we had to approach cautiously to not scare away the mammals.

Down in the riverbed

We walked in a single file and came much closer than I expected. The mammals where the first to take notice of our approach. As soon as the Buffalos started to look our way we had to stop. They drank a little more until they decided to leave our company. Their decision made it easier for us as the most skittish animal had left the scene. 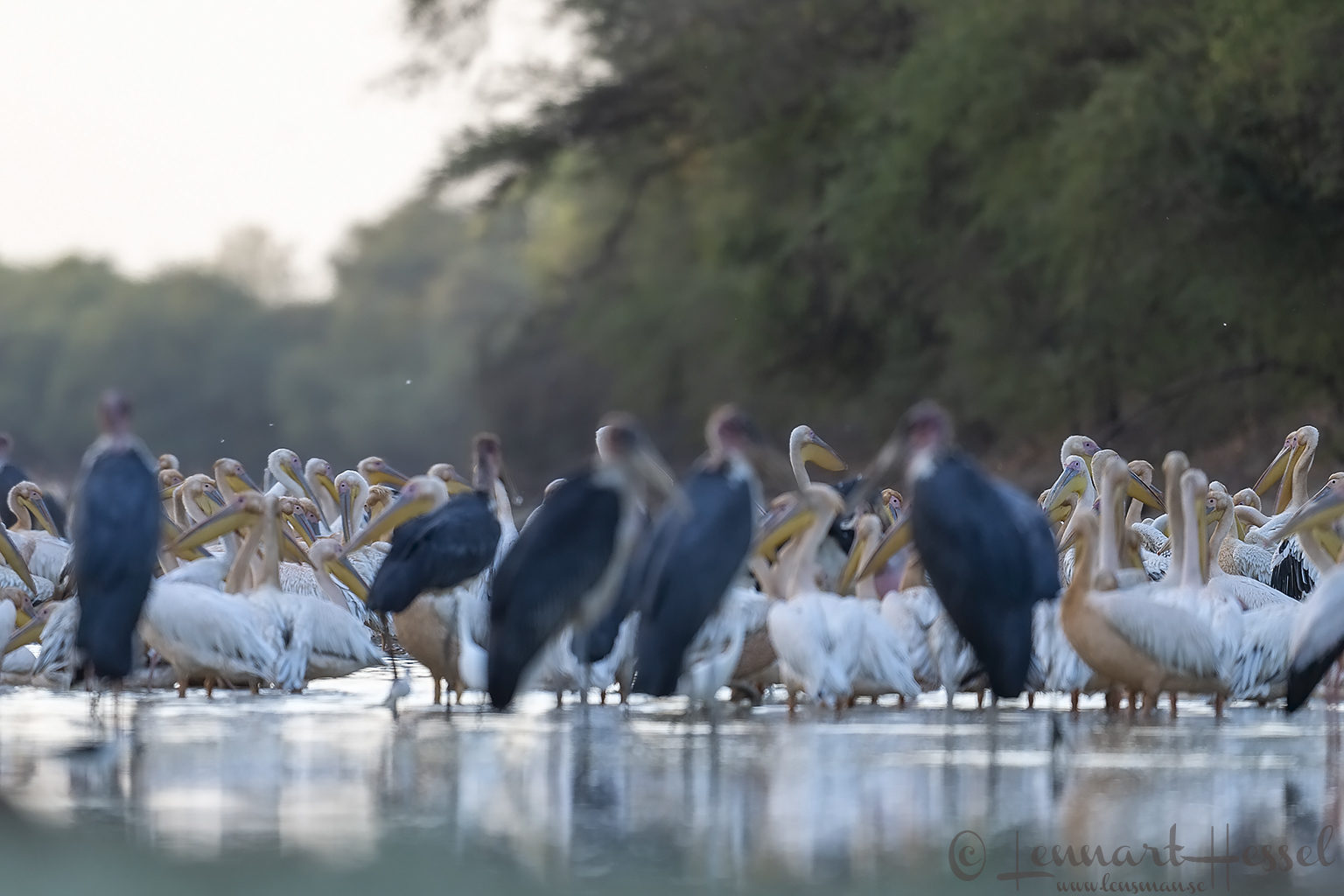 This scene was not easily photographed.

There where birds everywhere so I chose to try and work with two different mindsets. The first was to try to show as much of the scene as possible. Not easy to do with a tele lens, but I gave it a try. The second was to get down low in the middle of the riverbed and play with the depth of field.

I think both mindsets worked fairly well, but next time I need to bring a zoom to Zakouma National Park.

When I positioned myself in the riverbed I noticed a body of water with a few Black-winged Stilts so when I felt satisfied with the big scene I wanted to switch focus.

So, now I had to lie down on my stomach in the riverbed. Do so I started to hear a familiar sounds. The heavy rhythm of Pelican wings. The sound passed overhead and soon more and more Pelicans started to leave the Salamat River for their roosting sites.

Of course, I had to switch my attention back to the first scene that now was changing.

The first was to continue to work with the depth of field as I felt it could bring something special now that the Pelicans flew towards me. The second was to working with panning motion.

Video: In the riverbed of Salamat River

It is a technique I often use in Greece during the Pelicans workshop and one I’m comfortable with. The only drawback to the technique in this situation was that they were gaining height as well as flying slightly away from me, not parallel.

That meant I didn’t get as many keepers as I would have liked, but it still gave me a more diverse portfolio.

The ending of the first outing at the Salamat River

Let’s say that we felt satisfied with our evening in the riverbed of the Salamat River but got a last treat before leaving.

A single lioness had approached us when we worked with the birds. Our driver had spotted her, but she didn’t feel comfortable in our presence. Therefore, we decided to pack up and drive down with the vehicle into the riverbed.

That did the trick and she came down to drinking giving us the possibility to capture pictures of her. Maybe, not the most interesting but still the icing on the cake after an eventful evening.

A few days later we went back to the Salamat River with the goal of capturing a herd of Buffalos coming to drink.

This time we even knew that the Park Rangers had left the area and without human presence animals tend to relax. That meant we should have a good chance in seeing exactly what we came for.

On the way there we made a stop at another spot along the river. We had used a spotlight at this place on the way back home the first time.

What struck me then was all the crocs in the water. It was staggering to see all the eyes in the dark. That clearly showed how active crocodiles are at night.

They might even hunt on land at night by lying in ambush at game trails for instance. So far, I have never witnessed crocs moving on land, but I have seen tracks of how the move between different bodies of water. It is of course dangerous for them to spend time on land, because they can be preyed upon by Lions and Leopards.

We did indeed see many crocs of different sizes on this stretch of the Salamat River. We also found a few croc caves. All on the wrong side so we couldn’t knock to see if anyone was at home.

Back at the drinking spot

We continued to the same drinking spot we had visited earlier. It was obvious that we had hit a good timing, because Buffalos were already down drinking when we approached.

We worked with these, from inside the vehicle, until they decide they had their fill. That meant we could park the vehicle and get out.

To be out of a vehicle is what I prefer, but sometimes that is not an option. The reasons can be many and in Zakouma National Park I felt that the animals aren’t used to humans not being a threat.

That will hopefully change during the coming years if more tourists visit the Park.

We found a shaded patch not far from water with a good view of the river.

Nothing to see except birds to start with, but we could still pick up the noise of a buffalo herd on the opposite side.

That meant we had to play the famous waiting game. Thankfully not for that long even if I didn’t have any big issues with the warm temperature.

It was a spectacle when the herd arrived without taking any notice of us even if we sat in plain sight.

It took them some time until they realized that we where there and at that time they stopped moving closer. They kept their distance, but stayed and drank until one individual decided to run off and when one starts the rest will follow. Now it didn’t take long until they all had moved back up from the riverbed in a dust cloud.

All in all we had two productive outings at the Salamat River. I sadly didn’t get to witness the feeding frenzy that I hoped for, but instead had several hundred Pelicans fly over my head.

It was the only place in Zakouma National Park that we properly game walked. We could have done it in more places, but this was probably one of the more suitable. It was also a good because you could easily find shade.

I hope you have enjoyed the two videos as well as the small photo album below.

Don’t forget to check out my blog about the Elephant experience as well as the big photo album from Zakouma National Park. 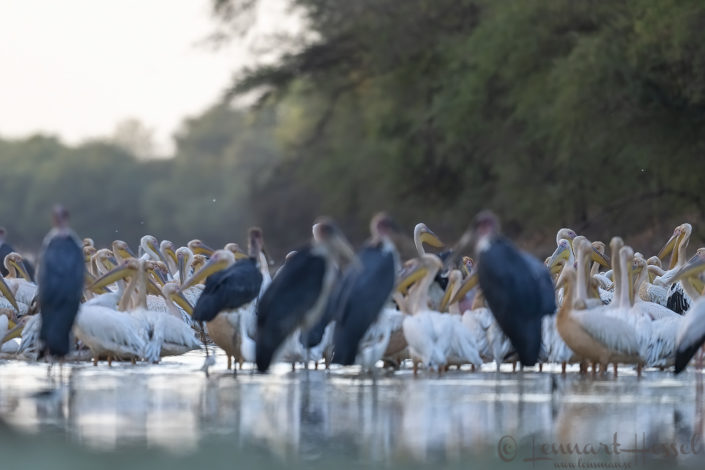 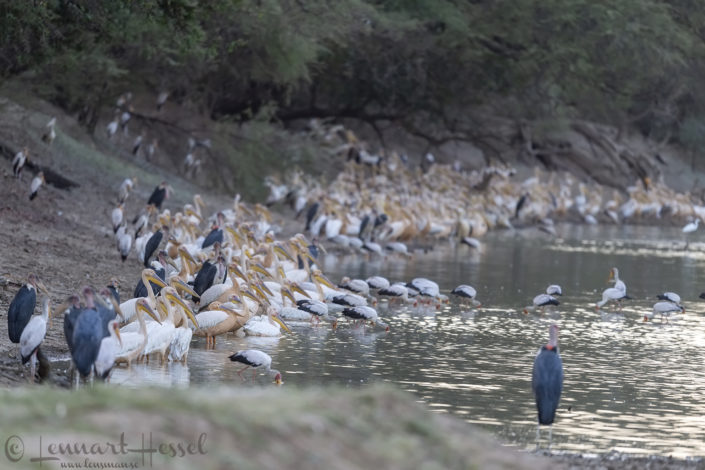 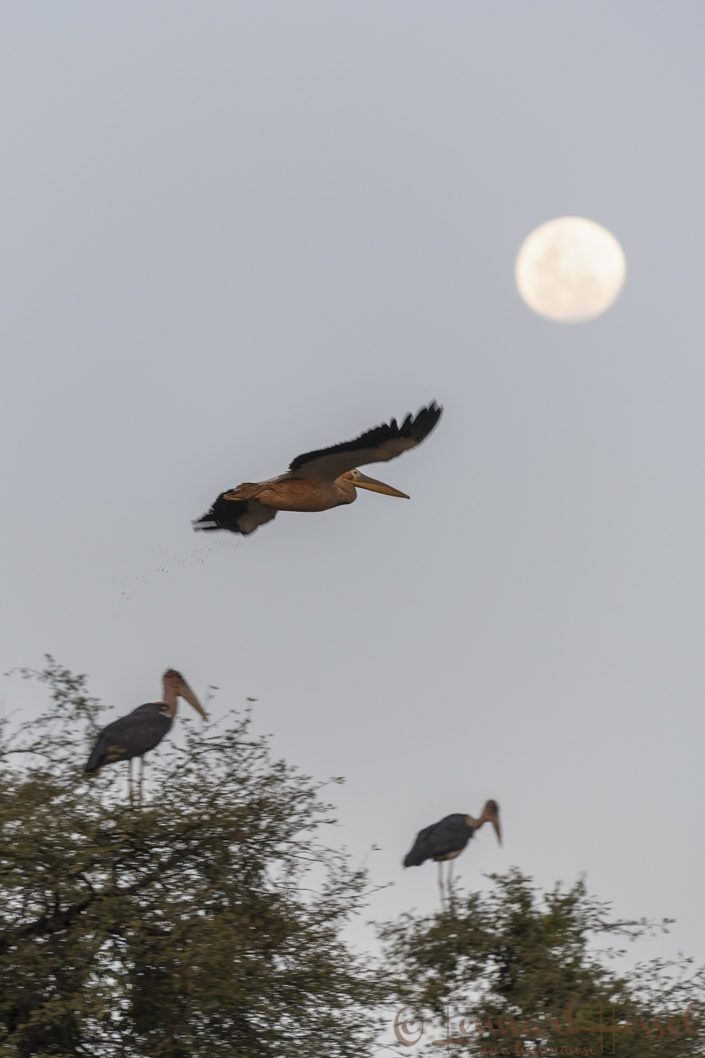 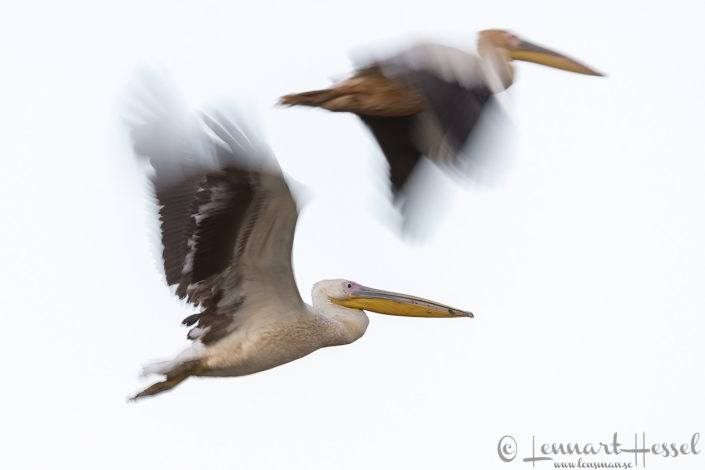 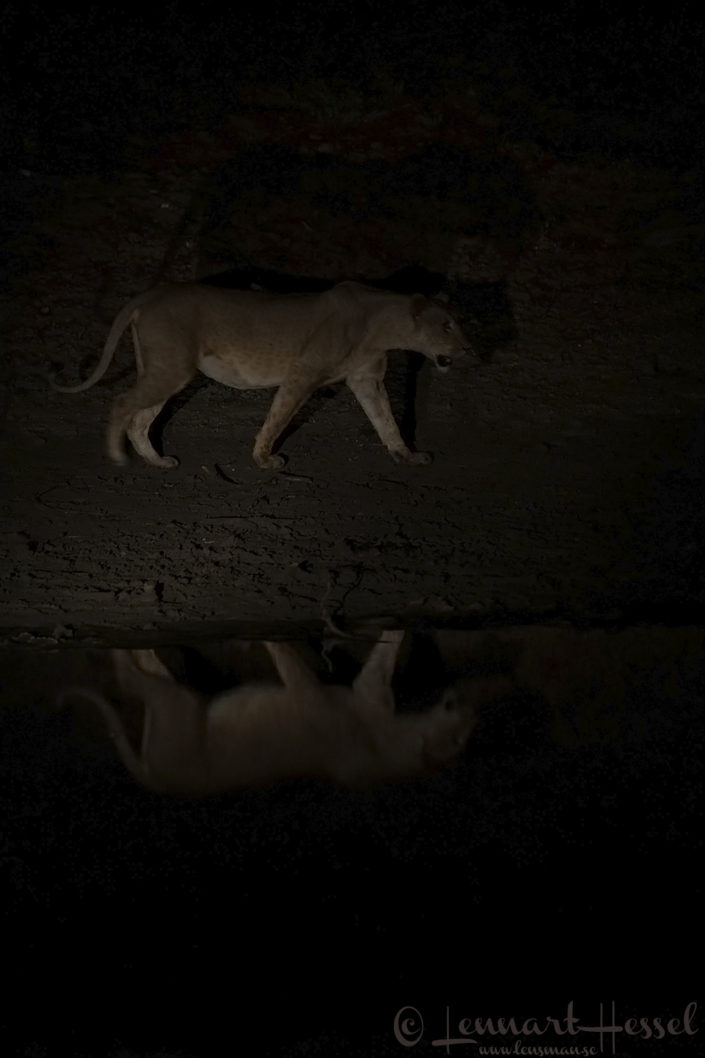 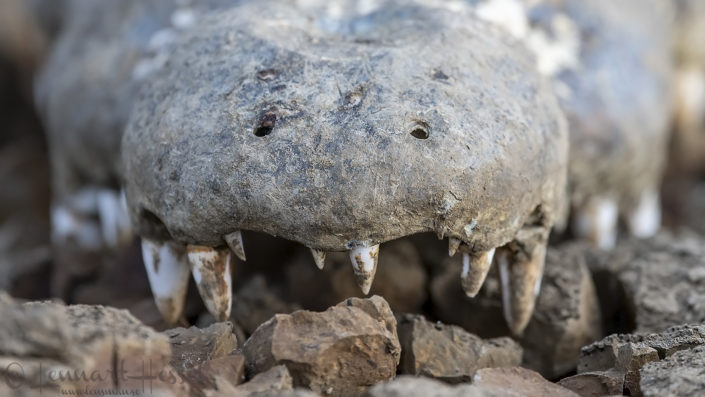 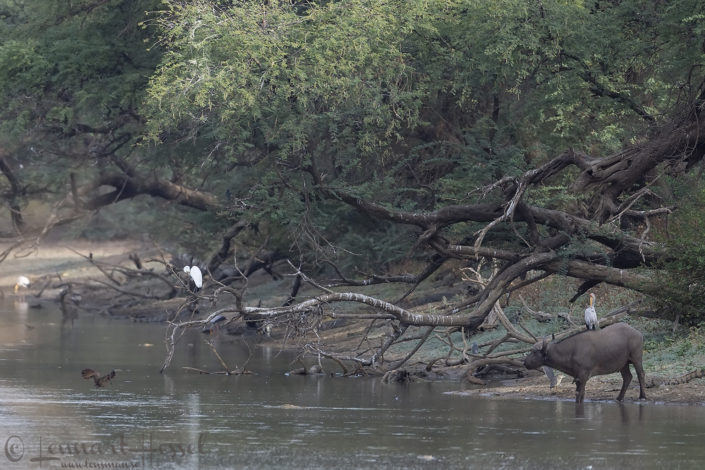 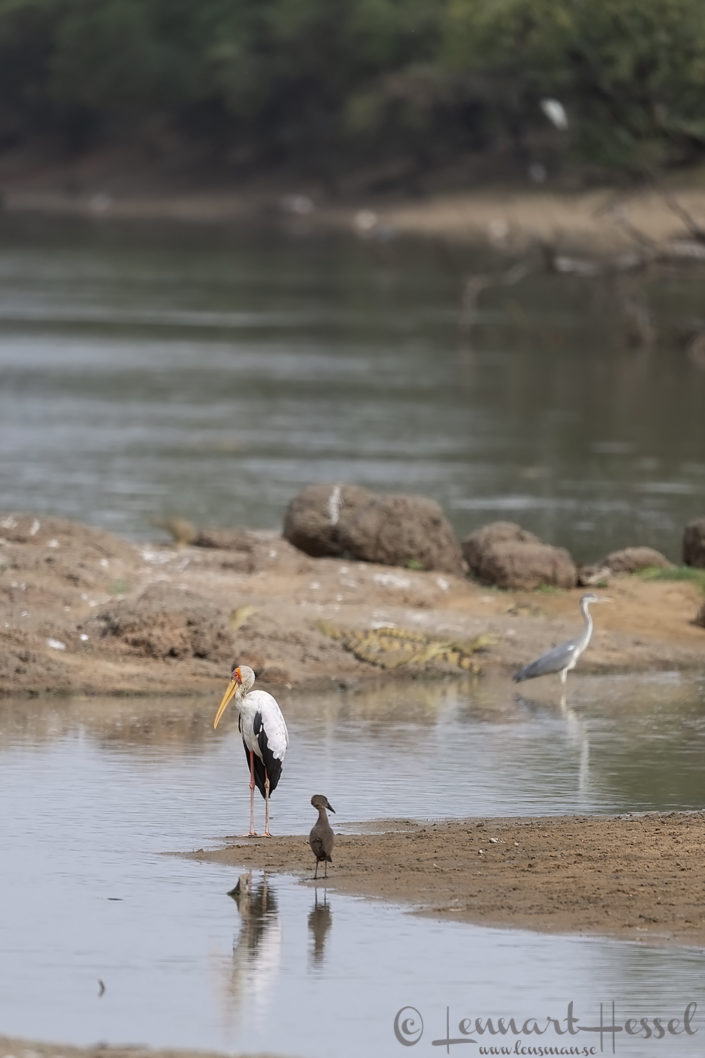 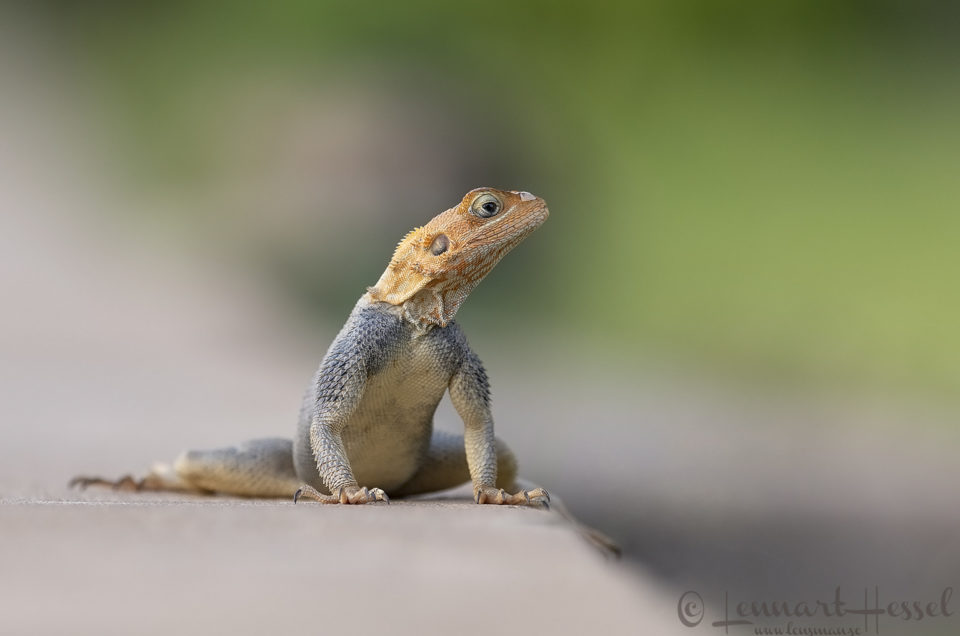